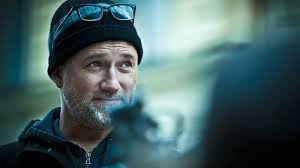 A series about my favourite directors and their filmography.

David Fincher is a director that I have always admired, even when I didn’t know it was his work!  I say this because Fincher, like some of his contemporaries, honed his talent directing music videos and commercials.  I liked Madonna’s “Express Yourself” and “Vogue” videos when I was a wee girl, but never considered who directed them!

David Fincher’s film directorial debut.  20th Century Fox hired him to replace Vincent Ward to direct the third part of the science fiction horror.  When it was released in May 1992, it was met with mixed reviews.  It comes as no surprise that there was a lot of studio interference with the script and budgeting, basically because Fincher was considered a rookie.  So, maybe it wasn’t the best entry in the franchise, but I enjoyed it just because Sigourney Weaver’s Ripley is a total badass!  Alien 3 received an Academy Award for Best Visual Effects

This is to me the real start of David Fincher’s movie odyssey.  A dark and moody meditation of a serial killer who bases his murders on the seven deadly sins.  Starring Brad Pitt and Morgan Freeman as the detectives tracking down Kevin Spacey’s John Doe.  Se7en was one of the highest earning films of 1995 and earned positive criticism from critics and audiences alike.

For some reason, this film tends to get overlooked a lot.  Starring Michael Douglas and Sean Penn as brothers.  Douglas receives an unusual birthday gift from his younger brother, in which he becomes embroiled in a “game” that seems to blend into his life but leads to frustration and uncertainty of the game and real life.  It had an average of box office returns.  The reviews were mostly positive, and Fincher received much praise for this thriller.

“The first rule of fight club…you do not talk about fight club”.  If you have been living in a bubble somewhere on a mountain for the past 20 years, then you probably won’t appreciate me disclosing the fantastic twist in this tale.  A screen adaptation of Chuck Palahniuk’s 1996 novel of the same title, and a return to working with 20th Century Fox after the troubled Alien 3.  Starring Edward Norton and Brad Pitt who superbly undertake the examination of society today and Generation X.

Panic Room is a thriller.  It is a good thriller.  It is a mainstream thriller.  Starring Jodie Foster as a single mother to a young Kristen Stewart, who hide in the safe room of their new house to evade the criminals there (Forest Whitaker, Dwight Yoakam and Jared Leto), who are determined to retrieve a missing fortune.  That’s it! Really.

And we’re back in the room!  The thing that I admire about David Fincher is that he will fight for the right ending.  In this meditation about unsatisfied obsession is based on the real-life events of the Zodiac killer who terrorised the San Francisco Bay area during the late 1960s and early 1970. The film ends with the viewer not having the satisfaction of a clear conclusion.  Why?  Because the Zodiac killer was never caught.  Starring Jake Gyllenhaal, Mark Ruffalo and Robert Downey Jr.  This film has appeared on a lot of critics’ top ten lists, and has been nominated for many awards, but it was notably not considered for an Academy Award.

The Curious Case of Benjamin Button (2009)

A story about life and death.  An adaptation of F. Scott Fitzgerald’s short story of the same title.  This film is David Fincher’s third collaboration with Brad Pitt.  Pitt’s titular character is aging in reverse, and the film follows him, grow up, fall in love, and eventually pass away.  This film was met with positive reviews and a box office success.  It also received thirteen Academy Award nominations, and won three, for Best Art Direction, Best Makeup, and Best Visual Effects.

A focus of the legal battles of Mark Zuckerberg and the founding of Facebook.  Starring Jesse Eisenberg as the above-named founder, Andrew Garfield, Armie Hammer and Justin Timberlake.  The Social Network was the darling of 2010, chosen by the National Board of Review as the best film of that year.  This film won Best Adapted Screenplay, Best Original Score, and Best Film Editing at the Academy Awards.

A screen adaptation Stieg Larsson’s novel of the same name.  Starring Daniel Craig and Rooney Mara, that tells the story of Craig’s character’s investigation of what happened to a woman from a wealthy family who had disappeared 40 years before and enlists the help of a computer hacker (Mara).  It sounds simple.  It really isn’t.  This film was a considerable success, chosen as one of the top ten films of that year, and won an Academy Award for Best Film Editing.

A screen adaptation of Gillian Flynn’s novel of the same title.  The film starts as a mystery that follows events surrounding Nick Dunne (played by Ben Affleck) who becomes the prime suspect in the disappearance of his wife (played by Rosamund Pike).  The third act of this film is the twist, so again, if you’re living in that bubble…  Gone Girl was well received again by critics and audience, becoming a commercial success.  Rosamund Pike’s performance has been particularly praised and has received many nominations for Best Actress.

If you have been watching Netflix, then you might be aware that David Fincher was the executive producer to the successful series House of Cards (2013-2018), and directed the first two episodes, you know to set the bar!

In 2016 Fincher directed another Netflix series, Mindhunter.  The series is based on the book Mind Hunter: Inside the FBI’s Elite Serial Crime Unit, this was debuted worldwide in 2017.

So, there you have it!  David Fincher’s filmography to date, and to me he is one of the modern classic directors that we have today.